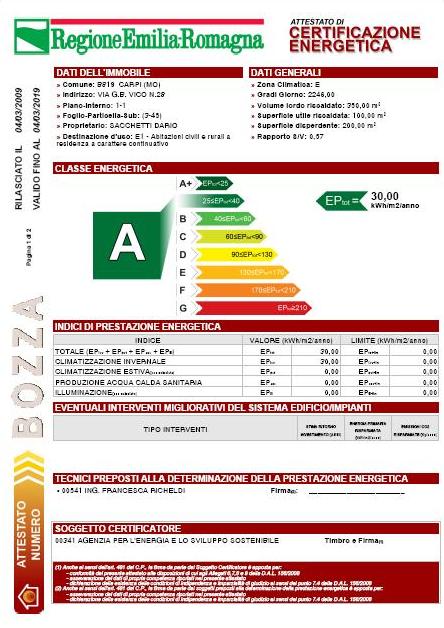 The energy certification of buildings is a procedure aiming at verifying the amount of fossil fuels a building needs in standard conditions in order to produce hot sanitary water and to keep constant, in the winter season, the design temperature (20°C for residential buildings) within the heated buildings.

The current legislation and the EPBD European Directive (2002/91/CE – 2010/31/CE) imposed the adoption of energy certification in every Member State and requires it to take into account the cooling energy need and the lighting needs too, for non residential buildings. The Energy Performance Certificate (EPC), namely the document reporting the procedure's results, must include reference data, such as the minimum values according to the law for the new buildings performance and benchmarks (correspondent building's classes on the basis of a scale of energy performance) allowing  consumers to assess the energy performance of their building. The certificate should also include recommendations for improving the energy performance, presented on the basis of the payback time.

Decree n. 156/2008 also establishes the EPC to be mandatory for new building and for existing buildings when sold or rented.